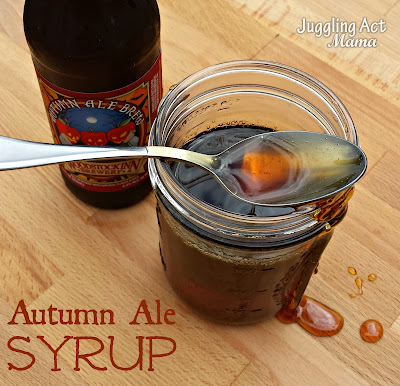 I'm not a beer drinker, but I bought a 6-pack of Autumn Ale Beer from Woodstock Inn Brewery thinking I would give it a try.  Well, friends, I am still not a beer drinker.  And, after one swig, Mr. Juggling Act declared that this beer could be used for nothing but cooking.
Well, then...
I'm not here to bash Autumn Ale, in fact, quite the opposite.  I have found it great to cook with, just as Mr. Juggling Act expected.
For starters, I decided on making a simple syrup using the autumn ale... it's pretty out of the box for  me, but I've been getting braver in the kitchen these last few months.  Now this isn't an exact science, so forgive me for the wishy-washy directions... trust me that it will al be worth it! 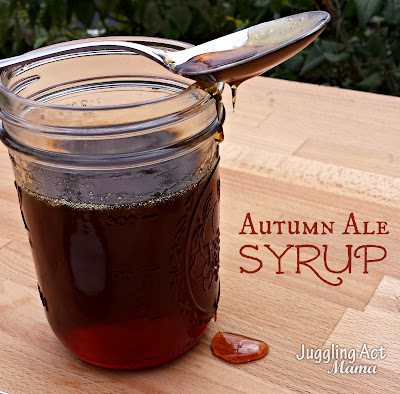 Autumn Ale Syrup
Ingredients
2 (12oz) bottles of Autumn Ale Beer
¾-1 cup sugar
1 cinnamon stick
Directions
Bring the beer to a boil in a medium saucepot with the cinnamon stick.  Reduce the heat and simmer.  Cook until the beer reduces by a little less than half - about 40 minutes.  Now your whole house will smell like Fall - apples and cinnamon and chestnuts.
Carefully pour the liquid into a measuring cup - you should have about 1-½ cups of liquid.  Pour the liquid back into the saucepot and bring back to a boil.
Add half as much sugar - so if you have 1-½ cups of liquid, you want ¾ cups of sugar.  Reduce the heat and simmer the mixture, stirring constantly until the mixture is completely dissolved. Cook for about 5 minutes - it will still seem thin, but as long as it is starting to coat a spoon, you've got the right consistency.
Remove from the heat and pour into canning jars.  The syrup will thicken as it cools.
Now for the fun part... serve the syrup over pancakes to your unsuspecting spouse and watch their pure shock as you reveal that there is beer in the syrup!  Mr. Juggling Act was pleasantly surprised, and I was, too.
Of course, this syrup can be used for more than just pancakes - check out the Autumn Maple Pecan Granola Bars I made for the Spiked Recipe Challenge!
Pin
Share
Tweet
Share
39Shares
« Apple Cinnamon Muffins with Brown Sugar Topping
Pecan Granola Bars »

Welcome! I'm Ang - the Juggling Act Mama! I love sharing quick and easy recipes, creative DIY projects, and fun family travel with you. Like many of you, I am a multi-tasking mama juggling priorities which is why here I offer solutions to tame your hectic lifestyle.